Batanes Food: What & Where to Eat for the Best Ivatan Cuisine

The Philippines northern paradise, Batanes, is a place that I proudly call as ‘home’. Ask any tourist who has been to our group of islands and they will surely speak volumes of its utter beauty and serenity — however, that doesn’t stop there because Batanes food or Ivatan cuisine is something to rave about too!

We are surrounded by clear seas and lush greenery after all, so you will definitely find a varied selection of seafood and vegetable dishes. They may all be cooked in a way that is simple, but I guarantee you, they are all flavorsome.

The best part of it all…? You’ll be assured that every plate will be fresh and organic!

So in order to make the most of your Batanes itinerary, let me give you an idea of the top Ivatan food or dishes to try, as well as where to best try them.

TRIVIA: When in the islands, you will notice that most of the Batanes food or dishes are served in a big green leaf (as shown on the cover photo of this post). This becomes even more evident if you come visit during a fiesta event.

Those leaves are called vunung or breadfruit leaves (or kabaya in Filipino). Traditionally, meals are served in this leaf for easy wrapping — not to mention that it’s environmentally-friendly too! As for utensils, we customarily use our hands. It may seem difficult at first, but as a local, this is like the best and most homey way to eat Batanes food. (In fact, science even shows that eating food with your hands is healthy! Google that to know what I mean *wink*)

Called as ‘tabtab‘ in Sabtang (one of the 3 inhabited islands in Batanes), uved or uvud is one of those Ivatan comfort food that I always miss!

It’s basically made of finely-grated corm (which is found at the base of a trunk of a banana plant) that’s mixed with ground meat (beef or pork), and minced fish. Afterwards, it is seasoned with onion, garlic, salt and pepper. This will be rolled into balls or served as is and can either be with or without its broth.
.

A common fish that you will find in the islands is dibang or flying fish — yes, it does ‘fly’ or leap out of the water, a defense mechanism to evade predators. To date, it has different variations (other than simply frying it as is), such as:

This is a dish that my father used to prepare a lot for our family (he cooks it real good!). This is made of  preserved gabi (taro) stalks which could technically last for years.

As a typical Batanes food, the gabi stalks are first soaked in water. Afterwards, it will be cut and minced and then cooked together with pork and patola (or sponge gourd).

You could surely think of it as another version of laing, a Bicol specialty in the Philippines.
.

Payi or lobsters are abundant in Batanes, so a humongous one can be easily bought for as cheap as Php 150 (or $3)! Indeed you could imagine my surprise when my family and I moved out of Batanes and I found out that my favorite payi is ridiculously expensive in the city.

As for another crustacean that you’ve probably heard about would be tatus or coconut crabs which are well known for its sweet meat and creamy aligue (or crab fat) — after all, they feed on fleshy fruits, nuts, seeds, and coconuts (which is not a big part of their diet, contrary to popular belief). Anyhow, these coconut crabs are impressive because they can climb a coconut tree, take one, and cut its husk with just their claws; although… it can actually take several days for the coconut to be opened.

Now here’s the thing: tatus is declared as an endangered species.

If you search Google, there’s actually no official statement that they are endangered; but in Batanes, it has been declared as so because it’s noticeable how it has become considerably difficult to find or hunt for them. I do remember that when I was small, my father can catch coconut crabs easily if he just goes to the forest and fields, but it seems that nowadays, such is not the case anymore.

Starting this year, consuming them is NO longer allowed. And in the rare case that you happen to stumble into a restaurant that offers you one, please refrain from eating it to help alleviate this problem. I mean I know that I’m kind of a tease for even discussing tatus when it’s actually a banned dish, but I feel the need to mention this so as to help educate you guys about the situation revolving this ‘endangered’ species in Batanes. Thanks for cooperating with us Ivatans!
.

The Batanes Islands are abundant with root crops, namely:

They’re steamed, fried, or smoked; but recently, we have started to make different ways of cooking it (I’ve heard that there’s even a wakay donut now).

Personally, I love to eat them fried and then dipped in condensed milk or coconut cream!
.

This is a different version of the popular Filipino dish, adobo, because luñis is rather served dry.

Lasting for quite a while, this traditional dish is made of pork cooked with rock salt until its fat is rendered and it turns golden brown. Back in the old days, it is stored in its own lard in jars for months to ensure continuous supply.

To best eat luñis, I love to pair it with supas whilst dipping it in vinegar and garlic!
.

Always a staple during fiestas or festivals, supas or balencyana (as called in Itbayat Island) is rice cooked in turmeric pulp (yellow ginger) that’s often mixed with garlic and pork.

It’s aptly called as yellow rice because, well… it is yellow from the turmeric. Some people would often say that the taste is close to ‘java rice‘, and that’s right! Though, I have to say that I like our supas more when it comes to flavor.
.

#9 Other Batanes Food from the Sea 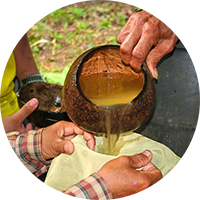 Chayi – or Spanish lime is not actually lime but more of a variant of a lychee. It can get messy to open it up though since its skin’s juice can be quite sticky, but the creamy pulp inside is so heavenly to eat!

Palek – our native wine that’s made from sugarcane and these are sold wildly across the islands.

When I was still living in Batanes, I don’t think we ever had restaurants — except for SDC which was more of a canteen than a restaurant if you ask me.

But with the recent tourism boom, a lot of restaurants have popped up and those that I recommend would be the following:

An octagon-shaped restaurant, this has an excellent outdoor deck area with awesome views over the West Philippine sea, Naidi Hills, and Basco port that’s located on the National Road near the Basco welcome sign. In here you can find both local Batanes food and Filipino food (must-try is their ‘uved’ which I really love!)

The sole restaurant of the luxury hotel Fundacion Pacita, this place does not only have a picturesque view over the sea, the hills, and Mt. Iraya but it also offers delicious Ivatan and western dishes for your fancy. I recommend trying the luñis, lataven, and picadillo a baka.

When you’re out to check Rakuh a Payaman (Marlboro Country) or Vayang Rolling Hills in Batan, you will find the humble canteen of Marconine’s. However, don’t let its size fool you because it offers you grand views and sumptuous meals at a very affordable price!

Uyugan, Batanes, Philippines
No contact number or email available, but it’s the only restaurant you’ll find at the spot.
.

Yet another accommodation place, its restaurant is also a favorite for filling up one’s appetite with great and authentic Ivatan dishes!

Nonetheless, I hope this helps you as you map and plan out your upcoming things to do in Batanes! It is also my hope that you will come to love not only the cuisine but also the Ivatan people, nature, and culture.

Let me know how it goes for you!

NOTE: I’d like to give my heartfelt thanks to Mr. Opal E. Bala for providing me with the above food photos. If you need a professional photographer in Batanes, he’s the guy you should go for! Contact him via his email: [email protected] or check out his Facebook page.