Netherlands’ Delta Works: One of the 7 Wonders of the Modern World

When we visited Veere, a small city on the Walcheren Island of Zeeland – Netherlands, we also took the chance to see the Delta Works—one of the Seven Wonders of the Modern World (together with the Zuiderzee Works)!

If you have no idea what the Delta and Zuiderzee works are, here’s the ‘low-down’ for you:

For centuries, the Netherlands has been constantly plagued with the problem of flooding during storms and it’s because of how most of its land (near the coast) are below sea level and/or less than one meter above sea level. In order to put a stop to this, as well as to reclaim more land, they started two projects…

There are a LOT of technicalities and engineering terms involved here but the bottom line is that these two projects are majestic and grand—there’s a reason why they garnered a spot in the wonders of the world. But I guess, to really give you an idea about how impressive these ‘works’ are, I’ll let the photos below speak for themselves!

(NOTE – The Delta and Zuiderzee Works are located in various parts of the Netherlands; we obviously didn’t have the luxury of time to visit every spot, so we decided to check out one: the 9-km long Oosterscheldekering. Located between the islands Schouwen-Duiveland and Noord-Beveland, it is the largest of the 13 ambitious Delta Works series!)

TRIVIA: The Oosterscheldekering is said to be the most difficult to build and the most expensive series of the Delta works. Apparently, they worked on this for more than a decade! (1976 to 1986)

You can choose to stop and park nearby to see more of the Oosterscheldekering up close, but you can also choose to just continue driving through the length of the highway.

But of course, we chose to stop by! My friend’s dad wanted us to see the barriers up close and of course, how could I say no to that?

We parked somewhere near Neeltje-Jans, an artificial island at one end that’s also used as an education center and a base for maintenance works. (This is the section on the bottom-right of the top-most image of this post. It’s totally free to park here and also free to get in on one of the nearby barriers.)

TRANSLATION: “Here the tide is ruled by the wind, the moon and we (the Dutch)“

Below is the view from the parking lot:

Pardon me… my ‘photographer’ was making me laugh (ALL. THE. TIME.) This is why I don’t have enough good solo photos, haha!

TRIVIA: The Oosterscheldekering is sometimes referred to by the Dutch people as an eight wonder of the world (apart from how the whole of it, the Delta Works, as one of the seven wonders of the world.

We proceeded to walk up to the highway to get into one of the barriers… as we were walking up the path, I was already in awe. Sure they were old, but they were HUGE! My friend’s dad is an engineer so he launched into a short ‘tour guide’ spree as he gave us more information about these storm surge barriers (the other information I acquired below are from sources online and the education center). The facts:

TRIVIA: The photo above shows a marker or line on a pillar of a barrier, showing how high the sea level was during the North Sea storm/flooding of 1953.

TIP: If you want to see another Delta Work, I suggest going to Maeslantkering.

It’s a beauty! Located at Hoek van Holland and the river Scheur, it is said to be one of the largest moving structures on Earth (rivaling the Green Bank Telescope in the USA and the Bagger 288 excavator in Germany) and the only storm surge barrier in the world that has large movable parts. As you can see below, it’s a set of two swinging ‘doors’ that are almost as long as the Eiffel Tower.

To add more ‘wonder’ into this structure, it functions automatically! A computer is connected to these barriers so whenever a storm surge is expected, the doors would float towards one another in order to close the waterway. They are then ‘flooded’ and this additional weight will make them sink; thereby turning them into a barrier. 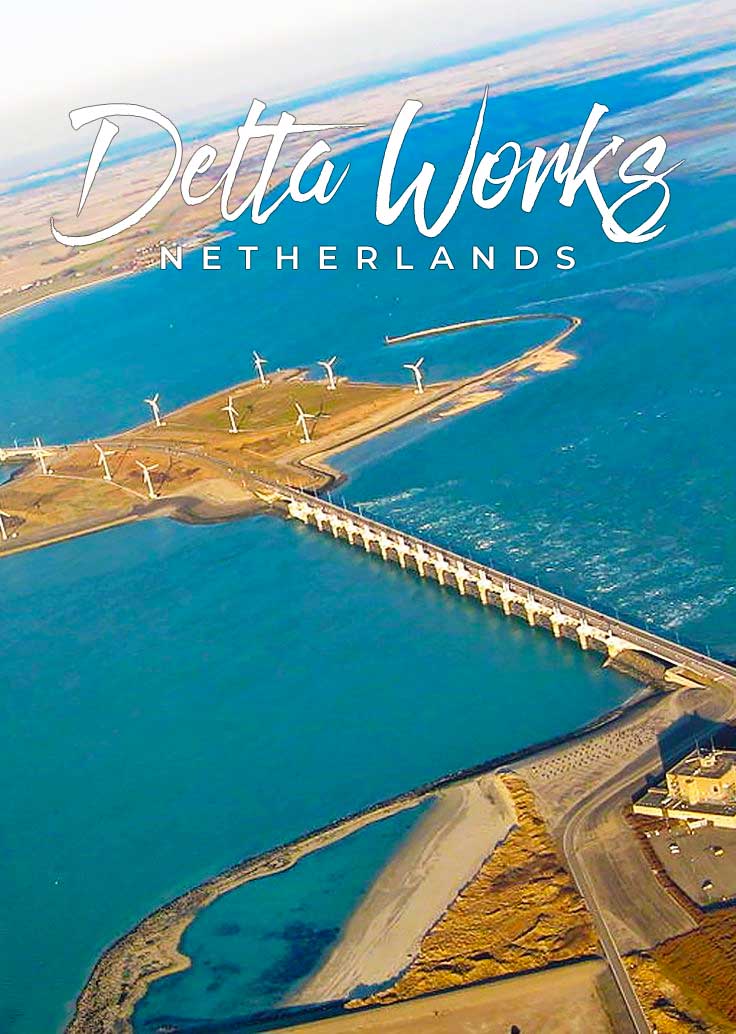 This was a really GREAT experience! It clearly shows how us, humans, have very astonishing abilities that we could come up with such amazing feats!

After seeing this, you bet that I am now on a mission of seeing the other 6 wonders of the modern world, namely: Channel Tunnel (between UK and France),  CN Tower (Ontario – Canada), Empire State Building (New York), Golden Gate Bridge (California), Itaipu Dam (between Brazil and Paraguay), and Panama Canal.